Stolen City are a Dublin-based band who pride themselves on their fun and energetic performances. Since the release of their debut E.P ‘Stolen City’ two years ago, the young band have worked tirelessly to make their mark on Ireland. They are very well known in the independent music scene and are loved for their upbeat pop-rock sound.

Their song`s “Cupids Daughter”, “Last Night” and “Let Her Go”  have being played on stations such as Spin 103.8, Classic Hits 4fm and iRadio. It's a surreal moment for any band to hear their music being aired on the radio. This has pushed them to work harder and a higher standard of production. Their main mission is to bring a change to the music scene. They see a big disconnect between bands and their fans nowadays. They say. " We never want to forget any fan who supports us " They are the reason bands succeed and we want to thank them consistently ".

2018 was a particularly successful year for ( Lead Singer ) Sean McGrath, ( Guitarist ) David McCabe and ( Drummer ) Ian Bailey. The band gigged all across Ireland from iconic Music Venue Whelans to Stradbally and  Electric Picnic. Last summer also marked their international debut as they took to the stage at German festival " Rock an der Eider ".

With a focus on their existing loyal following, the lads have concentrated on growing their audience further. They are releasing thought-provoking and creative music videos to promote their latest singles and updating on all social media platforms.

The band’s social media numbers are growing steadily and one of their popular tracks " Faces "  received 70,000 views. Not Bad considering their fanBase is at 3000 followers and growing.

Building on last year’s momentum, Stolen City are determined to continue their hard work to increase their following and gain further interest. With three major events already lined up – Indiependence, Sult Festival and Vantastival, this should attract a further following and another successful year for the band. Lots of Plans in the making for further headline gigs to consider this year. So many new tracks in the pipeline and ready to earn their place on a National, and International, platform.

I have being asked quite a few times about who are the Best Digital Distributors around today. To be honest there are all pretty much the same in their fee structure. There is one that stands out in regards to having more supports for artists. When I research for the best, I look for new innovative ideas being explored and implemented .

I have done a bit of research on some of the big ones like TuneCore, CD Baby and DistroKid and the new MusicDiffusion. I am edging towards MusicDiffusion for a number of reasons. They seem to be the more progressive in regards to the services they provide   . 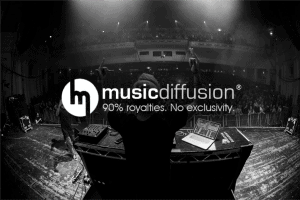 MusicDiffusion is the new Kid on the block but I am quite impressed with their platform. Along with having a very competitive Package it offers a free website for artists. Its has also launched a social network so artists from all the world can connect with the music community. This is a game changer in my opinion. It seems these guys went all out for their music community and they seem to be introducing new features all the time 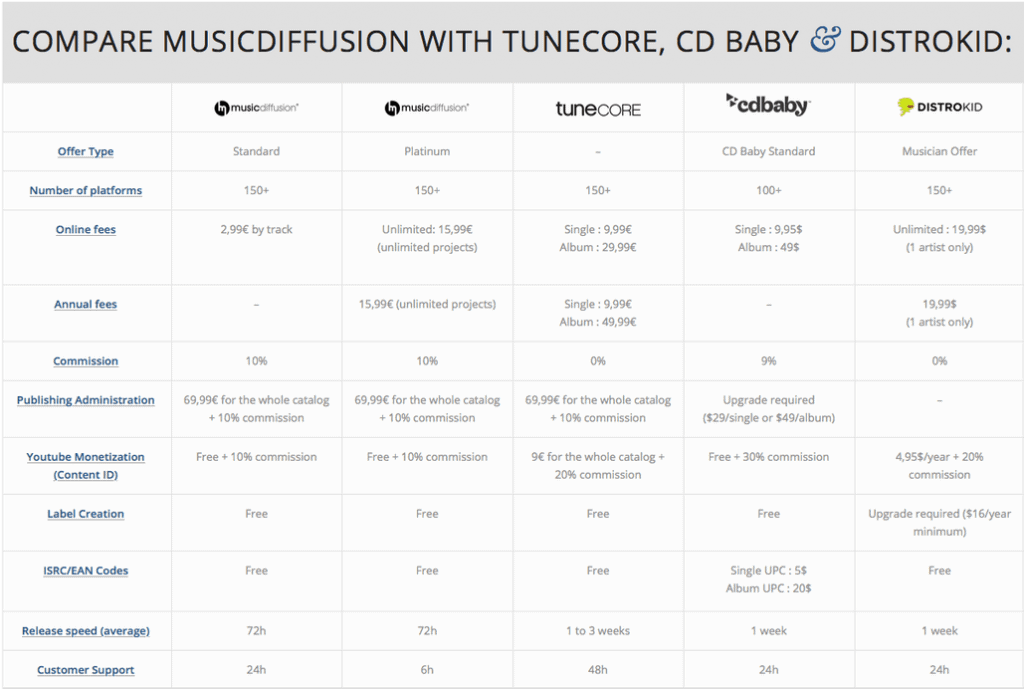 As far as fee charges, DistroKid seem to be the best but they seem to recoup this by doubling up on Youtube fees. To be honest they all seem to be pretty much the same when you Judge it on the overall fee structure. I like the Release Leverage MusicDiffusion has. It knocks the rest out of the park for turnaround speed.  It's a very solid platform with so many really good services on offer. They have a free package too so I would advise that you sign up and take a look around yourself. There are lots in there for you to study. Get onto its social network too and start getting plugged in.  I can definitely see this new Distribution Company fast becoming the place to do your business .

So there you guys. Musibiz is giving MusicDiffusion its seal of approval as the most progressive Distribution Company out there at the moment . At the end of the day you will have your own preferences but I really like this one. Leave a comment if you are already connected with them and give us a little feedback . If you decide to Join then update us and tells us your experiences .

44-Irish Indie Pop Band is a line on a map, a year, an age, a psalm, a beat, an idea, a number, is recognisable, and a single second in time.
This time is ours !

44 are an Irish Indie Pop Band with founding members Harrison & Leon. While 44 is only in its infancy,
the guys have played in other notable bands in the past, and have been held in high regard as Songwriters, and live
performers.

But this is a fresh start, where nothing gets in the way of the song, everything is on the table, to bring strong melodies,
riffs and samples, to the forefront. Over the past twelve months, locked away in their studio, on the western edge of
Europe, they crafted a long list of edgy pop tunes, and with a complete openness, have brought them screaming into a
digital age. With influences from Imagine Dragons to Tears for fears, Lorde to The National, these songs are eclectic,
but brought together with flowing bass lines from Leon, and ultra catchy melodies from Harrison.

The Empire is Over

"The Empire is Over Ep" is a collection of 4 new songs and 4 new videos, which will be released on AUGUST 9th 2019 .
The songs are stories of who, when and why, we strive to create our own personal empires. It’s filled with moments of
love, loss, and triumph along the way. It’s been a journey to put these four very personal songs together, while
events, both personal, and global, have shaped the tone of the EP.
“We hope you can find your own journey in these songs, and fight to hold on to, your own Empire” - 44.

So please give us a follow, add us to your playlists and give us a shout out on social. we will be in touch with a T-Shirt (while stocks last) website and more pictures www.44theband.com