If you are looking for the next great rock act to come out of Ireland then you need look no further than Elevation falls. They were introduced to me back in 2013 when they first formed and if i'm honest, I seen a lot more improvement to come from them at that time.

What struck me about this Band at first was Hazel Jade Rogers ( Lead Vocalist ) . She had an incredible Range and confidence for such a young performer back then . Like most Bands, they have had their ups and downs at the beginning with Member changes throughout the years but they have it just right at present and have an excellent range of talented musicians.

Chris Young and Darragh Shields are on lead guitars with tremendous skills and what I like about them is there is no ego between them . Each exceptionally talented in their own right but when on stage they seem to gel their talent together equally with each encouraging the other. Its very special to watch .

Next comes Gabriel Grecco ( Bass guitarist ). This guy is a ball of energy on stage and you just can't take your eyes off him. He goes into a world of his own and seems to physically respresting the overall beat of the band. There is a lot going on on stage Guys. Goosebumps with every track is the only way to describe it  .

I love the new drummer. Alex Sanchez De Ordena is the business. Very cool looking guy and reminds me of a rock star from the eighties . He looks the part and by God, can he play.

So back to Hazel Jade Rogers again. She has developed into one of the best vocalists we have here in Ireland  Hazel engages with her audience at every opportunity and can deliver whatever the crowd demands . Don't get me wrong here , This is an original Band but you will be surprised with what they come up with on the night. Just to please the crowd you can expect some Phil Lynott, Gary moore, Alter Bridge and even Hozier rocked up to balance the theme of the night. Hazel's vocals are flawless and awe inspiring that leave you with an unforgettable experience and wanting more .

In the decade I have being involved in the Music Industry, I can safely say that I haven't seen any other Band that compares to Elevation falls in their overall performance. I've seen many thousands of artists since I first began my own campaign to help and advise Independent Artists. This band for me is the best around at present. I am very happy to give them this small review as a thanks for their Music.

Their new album " What Will Be " is out now and was Recorded and produced by Alwyn Walker from " Westland studios " In Dublin . The Studio and producer speaks for itself about the quality of this band . Go buy this album guys . you will not be disappointed and its only the start from this great Band .

I have to give a final mention to their Manager Belinda Rogers who has moulded this Band into what it is . Seldom Artist managers get a credit for their efforts . They are the backbone of any great artist and Belinda is no exception . She has worked tirelessly to bring this all together . She has sacrificed her time and money to this project and my congratulations to her on building this unique Band that will stand the test of time .

To all the Major labels out there . Check out this band in Ireland as they are ready to go . Elevation Falls have a big fan base and people will support them with a Label's help. They are a nice bunch of individuals who just want to play music and entertain others. The band are humble , respectful to everyone and above all exceptionally talented with a big future in my opinion . Go and see them perform . Their live performance is better than their recordings . Live performance is the key to any great band and this band are at the top of their game. It's only a matter of time before someone will spot them and sign them immediately. I really hope it's very soon .

Youtube tracks for the latest Album " What Will Be ".

Greg Pearle is an Irish Singer Songwriter from Dublin and based  in Ballina, Co Mayo. This hidden Jewel has being performing all of his life in Ireland.  Anyone who was lucky enough to hear him perform will know instantly that they have experienced something special, His live performances are unforgettable with his unique vocal tone and beautifully crafted tracks. His performance was so inspiring that he was responsible for inspiring Rock n Roll legend " John illsley" out of retirement. Later on both would record the collaborated  Album " Beautiful You " .

The Story behind their epic Meeting.

John had retired from music and moved to rural Hampshire with his family to focus on passion for painting. He bought a local pub, "The East End Arms" and "The George Hotel" on the Isle of Wight. There he began exhibiting his art to the world.

Everything changed when John met Greg and his Irish rock group Cunla in a pub in Leicestershire. It was March 2005 and John was so impressed with the Band that he took to the stage. This was a huge deal as John had retired from performing on stage in 1993. He joined the band to play a couple of Dire Straits numbers and loved it.. John recalls: “I was asked to play a few tunes with them"." I liked their attitude and the fact that despite the large quantities of Guinness that had been consumed, they could all play very well.”

To coincide with an exhibition of his art in Les Baux de Provence, John was asked to perform some Dire Straits songs.

John Recalled "The Mayor of the town asked me and it’s not done in France to refuse the Mayor ". "I asked Cunla if they could learn some Dire Straits songs and it turned out that Greg was a big fan and knew a lot of the songs already”.

John and Cunla played at the Festival des Alpilles, performing to 1300 people in the Cathedral D’Image in Les Baux de Provence. The show was recorded and John was “pleasantly surprised” by the results. “I initially wanted the band to have a record of their French experience but several people heard it and encouraged us to release it.”

John and Greg became friends and John discovered that Greg was a very talented songwriter. “We spent some time knocking his songs into shape then began recording them in Mark Knopfler’s fabulous studio in Hammersmith". "Wait ’till you hear them". "Greg writes brilliant songs and has an amazing voice.”

Greg Pearle will always be remembered for the man who inspired John to find excitement in recording and playing live again. He takes his mark from greats such as Tom Waits, Van Morrison and Chris Rea, Pearle’s gravelly tones are infused with emotion from a well-traveled life.

Their collaborated album didn't get the the accolades it deserved but Greg has absolutely no regrets . Greg Recalls " To work and record an album with one of the greats was an experience I will cherish forever " . 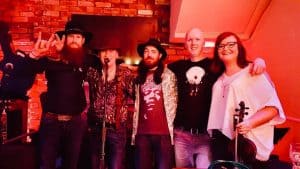 In 2018 Greg decided to go on the road again and formed the Band  "Gypsy".  "Its early days yet but things are starting to really move" , he says.  They were well received in " Brennan's Lane "  Ballina when they launched in early 2019 and now they are a resident Act. Their profile is growing rapidly and 2019 will be a very exciting year for Greg and the Band .

I had the pleasure of being at the launch of Gypsy and enjoyed the performance very much. They have a very cool vibe about them with Fiddle , Banjo / Guitar , Drums , Acoustic / Vocals and Bass . I would describe them as New Age Irish Folk Ballad act with Leonard Cohen and Dire Straits influences . All of the tracks were beautifully and carefully arranged to give the audience an unforgettable experience.