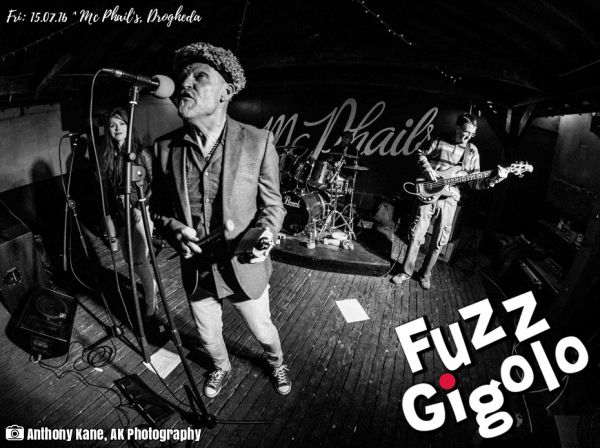 FUZZ GIGOLO: (Drogheda, Ireland) Are a 5-piece LO-FI “Rock n’ Roll” band that pen and perform original compositions * while packing a quartet+ of salubrious covers for a conventional mix? Born June 2013, from a multitude of retrospective influences and ideas (too broad to dilute?), they lineout as follows;

WHAT’S THE FUZZ: Likened to a cocktail of “Deacon Blue” & “The Beautiful South” with a twist of “Ian Dury” doing “a Joe Cocker”, shaken not stirred? and subsequently labelled as; refreshingly vibrant, melodically crafted, upbeat and contagiously energetic, oozing “Live Appeal”

GIGOLO ROCK? “In it to Gig” and “hard at it” since March ’14, (with a busy schedule ahead) notching-up 90+ successful shows to date (North-West, North-East & East Coasts) * Appearances include;

BEYOND AND INFINITY? Gaining in momentum and vigour with each performance, building a solid reputation and “sing-a-long” travelling fan base i.e. “The Gigolo Express” (AKA:) “The Jiggs” (just for internal fun?) have steadily become an identifiable noise, impossible to ignore …

I can hear Steely Dan in there – a real cool sound