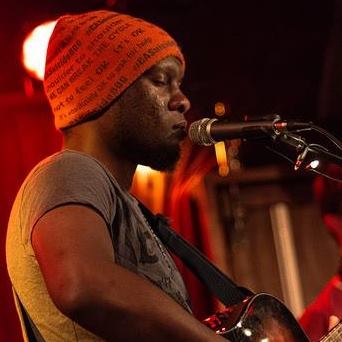 Tobi Kaye was born in England to a musical home and grew up learning basic theory from his father ( A choir director and accomplished instrumentalist). Initially he began on drums at age 4 (once he was able to hold sticks without eating them or throwing them at people. Ah... good times)

" Growing up in a Gospel church as a child was both rewarding and terrifying if you have any sort of musical ability " He says .

" It's like the hunger games except instead of being killed and having it end there, you learn how inadequate you are and practice to death only to learn it again the next week. Fun! YAAAAAY! "

Tobi Kaye took up guitar when he was 16. " Teenage Angst ". Plus it looked easy and he was told chicks dig guitar players. " How wrong was I " he says.  But it brought out his inner songwriter. In fact a lot of the songs he wrote back then are the framework for his upcoming E.P. "Be Together", "It Seems" and "Memories" are all products of his fumbling on guitar attempts to write music he liked.

Round 18 onward he took a turn for the worse emotionally. He had no idea what he wanted to do with his life and he had no real purpose for the longest time. Through it all, he had his music to keep him going while he figured out what he wanted. It wasn't till he moved to Galway that he really began to figure out what he wanted from life and essentially what he could live with or without.

Meeting up with the crew in Galway was fantastic. Tom Pyne and what would eventually go on to be the play open mic was and still is a fantastic resource for musicians in Galway!

Eventually he set up a cover band. We were rough around the edges but eventually became the current iteration of section 9. Over the years they performed in many venues including Monroe's tavern, Coyotes, The Cellar and Seven!

During this time he tried to play original music as well but it's hard to pay the bills when your trying to learn how to do so many things. He admits to letting himself down and shooting himself in the foot with a lot of people. I'm still only learning how not to do this.

Thankfully through fate or luck he always seems to meet some of the most talented people and work with them to create and achieve a collective vision of music and by extension, life. He managed to meet people who despite his apathy and lack of experience still believed that he could succeed in this business.

People such as Paul Noone of the Stock exchange Bar (Gave him his first Galway gig), Gary Monroe (Booked him as a Solo original artist and then booked his band Section 9 despite the vast amounts of talent available to him), Ferg McSweeney (who booked his Band in Seven and the cellar when they started, and cut us when we needed to go away and learn how to do our jobs right).

This year (2018) is a big one for Tobi because he finally started supporting himself purely from music." It's difficult to work and create when you can't afford to eat or live " He says. Sleeping rough, hanging out with friends, eating junk food, having no equipment or poor equipment, borrowing just to be able to gig. All of that lead to this point.

Tobi kaye is releasing his first EP this year. A lot of mistakes were made doing this time but in his opinion, you only fail when you give up.

Thanks for having a read and tobi hopes to see you soon at a venue somewhere near you !

Lastly he thanks his Mom. Supporting his pipe dream was not easy. " You gave up a lot to allow me to be in this position ".