Music in the Digital Age and John Hartmann

In 2005 I decided to go on a quest to help the Irish Artist, Great Ideas can put you in the path of some great people .This was the case when myself and John Hartmann crossed paths with our own Unique but common Goals.

It was in 2005 that I became interested in helping the Irish Artist with their marketing and promoting. At the time, I Spent many years booking various artists but knew very little about the inner workings of the processes needed for a successful Music Campaign .

I was from the older Generation and knew nothing about working with computers and had no knowledge of Social Media at the time. To have any impact in helping the Irish Artist then all of those tools would be necessary for me to move forward. During that time i thought that my prior knowledge in booking bands at venues would be enough but i was only scraping the barrel of this industry. I needed to start somewhere so i thought a website would be a good place to begin this journey.

The beginning of my Quest

The website " Livemicsworld " was built out of my idea that a solid base was necessary to all artists who wanted a career in the Music Industry. A place where all artists could join and share their own knowledge and have the ability to network with one another. I have to start somewhere so I started sharing from a venue's perspective and what they would like to see from an artist that was looking to secure a gig.

I was a very Ides and where the Artist could begin to understand what was required from them. I had lots of interest in those times as many artists were struggling to any impact with their Music.

I was shocked to realise that most artists had no real idea in how to promote themselves effectively. MySpace was the platform in those days and artists were basically post up on that platform. That was about it. No real idea of what do after that. To be honest i had no idea how to help them at that time but in knew that had to something more.

I decided to have a  Music competition within the new website to get Artists motivated and have something to work towards. To be more active and be part of an annual event that they could include in their yearly self promotion. This was very popular and attracted many seasoned Acts that were trying everything to get themselves out there. So i knew that i had activated something that was obviously needed.

I was uncomfortable about the term "Competition" and it implied one artist competing against another. This was not my intent so I changed it to an award based event and would be based on Various aspect in the artist's career.

Around this time you had all these international Talent coming out and the Awards Initiative died very quickly. Another factor was, we are entering a recession and no one was going to live performances. Venue and Bars were closing by the dozen every week . it was a very difficult time for everyone and many artists were struggling.

Back to the Drawing board

It became very clear to me that if I was to benefit the irish Artist, I would have to fully investigate the workings of the old and the new ways within the Music Industry.

In 2009 while looking for information in Music / Band management, I stumbled across a website called " The Holodigm ". It was a very impressive looking website with an introduction from the site creator " Professor John Hartmann ".

Delving further into The Holodigm, I came across some Recorded classroom lectures. These Classrooms were full of information from some top professionals in the Music business  You had Jerry Berkley from the Band " America ", Ben Bernstine " Music Agent ", Jerry Boylan " Record Producer", Harlan Goodman " VP of Music ". Cree clover Miller " Attorney ", Ron Stone " Manager " and Howard wolf " Promoter ".  Look them up Guys. These individuals are some top people in the music business in the US.

I couldn't believe what i had stumbled onto.  It took me a few days to get through all the information from the the classrooms as there was so much information to take on board from decades of experience. This John Hartmann Guy must have being very well respected by all of them and he himself, I thought, needed further investigation . 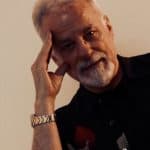 John Hartmann began his professional career in the famous mailroom of the William Morris Agency. He later served as the Morris office liaison to Colonel Tom Parker the legendary manager of Elvis Presley the king of rock n' roll.

Hartmann is a result oriented operational leader with more than fifty years experience in the entertainment industry. His proven expertise in creating and executing career strategies is evidenced by the quantity and quality of great artists he has been honored to serve     Quoted from the Holodigm Website

As you can read , John Is an incredible Knowledgeable man who had dedicated his later years, teaching in Marymount University, California  . I was lucky enough to be in constant contact with him from 2009 to 2014 and he was very generous with anything I needed to know. We shared plenty of Music from both sides of the water and on a couple of occasions he took some interest in a couple of acts from Ireland. He really liked the Band "Red Empire" and another Irish Band " Friends of Emmet ". He even went as far as passing this acts onto his long time friend "Ron Stone" who is a legend in the business.

After that he seemed to go offline about his new project " The Holodigm ". It hasn't moved forward since I first came across the website but it still has incredible and useful information from anyone who is looking to gain more knowledge about the Music Business.

He had a dream to assist the Artist from anywhere in the world. He wanted to teach all artists about the processes and what it takes to succeed. He wanted to have an academy where Artists and Managers could train about the business and be assisted by him and others on his vast contact list. He wanted the Artist to become independent and have all the tools available to them with his help. He knew that the Industry was in transition and that artists were being left behind as the major labels were adjusting to the new Digital Music Paradigm . Artists needed to adjust with this shift and the Independent route could be possible if the proper platforms were in place ..

It was an ambitious project with Huge financial backing required to cover all areas required for a successful campaign.. Perhaps he couldn't get that backing and this is why he went offline, who knows? From the five years that I was fortunate enough to know him , I learned a great deal and knew that so much more needed to be done . Maybe he will continue on where he left off and we can converse again.

I truly hope so !! He wanted me to be his representative in Ireland and spread his new paradigm when it was ready. I was excited about working with such a man and being in a position to help so many artists that needed it.  All I can do for now is continue and build from what I have learned so far. .

I couldn't leave this man out with the new musibiz website. He was so influential to me and is one of the reasons why I continue with my music project. There is so much information on his old website and there was a free ebook available there too  . That seems to unavailable on the website now which is a pity.

Music in the Digital Age and John Hartmann

He wrote this book while in hospital after an road accident. Before it was published he shared it with me and and asked me what i thought about it.. I loved what he had written and asked him if I could share it with all the Irish artists in Ireland. He gave me full permission to share to anyone who i thought needed it.  I have shared it a few times in the past and I will leave a link to it below for anyone interested in learning more.. It is a vital Read in my opinion and we are very fortunate to have this available to us.  Free Ebook

This all came about when two people from completely different backgrounds came together by a common need to open up more channels for artists all around the world. Any information towards this reality is vital and must be shared to everyone.

As John and I agreed  ” With all ideas , Sparks others and the process of solutions that makes them a reality”. Perhaps an artist reading this will get enough information from all the material available here and make their dream a reality. Perhaps others like myself will come up with more ways to help more artists make their own reality . who knows?

One of my last conversations with John was when I asked him ” What is the best advice you can give an Artist today”?

John’s Answer: ” If you can’t make it in your own backYard, you’re not gonna make it anywhere ” !!

This question was based on a conversation we were having about a Acts starting out and also about an established act looking to break into another country. The same applied in both cases. Starting out you must establish yourself in your own area first before moving on to the next stage. In regards to the established artist. Establish yourself first in your own country before thinking of Moving into another..If you keep this in Mind, you will know where you are and what you need to do, to get to where you need to go..

Hope you enjoyed the read Guys and get something from this blog.. For More Blogs go HERE

Building an International Independent Music Network
10 Marketing Strategies To Boost your Music Career
How to Manage your own Music Career
Building a Music Website
Optimising Your Youtube Channel with VidIQ
Digital Music Distribution - MusicDiffusion
Building a fanbase for musicians
How to Build a Fanbase for Independent Artists.
Digital Marketing for the Independent Artist
Setting up a Digital Marketing funnel in the Music Industry
Project 82
Westland Studios Dublin
Reality Check for the Irish Artist Part 3
Understanding the Music Industry Today
Music in the Digital Age and John Hartmann
Elevation Falls - Birth of a New Rock era in Ireland
Reality Check for the Irish Artist / Booking A Music Gig In Ireland
Email Marketing for Bands