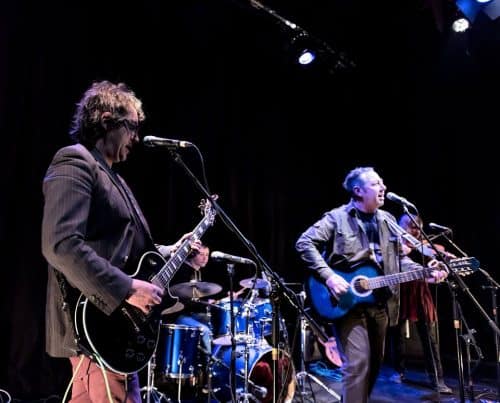 FreeSpeakingMonkey the brainchild of Ciaran Rock ( The Pale ) and fellow songwriter Brian Sweeney (Dune Collective) who form the partnership. They are currently releasing a 4 track cdl Dee Armstrong of Kila, sean O Donnell on drums and Percussion and Henry Pearse(Bass and Mandolin).

Ciaran Rock is singer songwriter who grew up on the north side of Dublin and from a young age put pen to paper and won his first literary award age 12 with his poetry. Heavily influenced by his older sisters and brothers record collections in the in the late 70s he picked up guitar and started to write songs with local groups in the 80s.
He was one of the original songwriters with The Pale (Darlings of the media early 90s)and wrote and performed on the Why go Bald album (featuring Dogs with No Tails and Butterfly )which later became Heres One We Made Before )released on AnM records.
He moved to Berlin where he met a band called Souls in Exile a multinational Indie Band and worked for 2 yrs in Berlin where the band released Hypnotized (one of Ciaran's songs) and made a living on the Berlin Circuit.

In the mid 90s he returned to Dublin to have his Family and during this period he formed the band Jekyll and the rock indie combo where well received by the press and in particular Eamonn Carr of Horslips helped launch the band. Jekyll released Ark a mini album on Crib records which some of the tracks can still be heard on radio and seen on YouTube .In 1998 he received an Irish Life Literary award for his Lyrics in his song Frames(Houdini s trick) which was chosen By Dermot Bolger.
Ciaran and his family left Dublin to move to the country and now live in the Northwest, kiltyclogher ,Co. Leitrim where he now sings and plays his songs in FreeSpeakingMonkey .

They are currently releasing a 4 track cdl Dee Armstrong of Kila and sean O Donnell on drums and Percussion
They have played mostly in the North west but have of late played at Knockan Stockan and in the bog cottage body and soul section of the Electric Picnic.