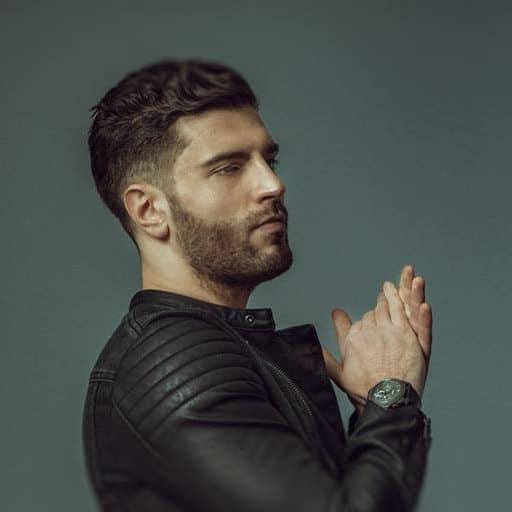 The Rnb/Pop artist George Ivanovich was born in Krusevac (Serbia) on the 23rd of March 1991. He started his singer-songwriting career on his guitar shortly after the wars subsided and had his first gig at the age of 14. Two years later he was already playing in front of a crowd of 5000 people in his hometown.

After high school he moved to Belgrade where he acquired a Bachelor Degree in Culture and Media while collaborating with various music production studios based in the Serbian capital. During the time of his Master studies (Society and Politics) he was living in Warsaw, Poland, where he was a member of No Hay Banda, an acoustic duo made with Adrian Gallardo Simon from Spain. In collaboration with the Warsaw Film Academy, he joins efforts with the prominent Polish female director Lulu Zubczynska and releases a music video for the first single of his solo music career, titled: ‘Too much is better than enough’ followed by an EP originally presented as a short film on Youtube under the title ‘Stranger’ – including the songs:
- Para
- Stranger
- Your lover
Upon the return to Belgrade he meets with Darko Dozic, the president of the international organization Tango Natural and works together on a project titled: ‘Like love (A Tango for Two)’ which was also supported by the Serbian CNN TV station. It tells a broken love story in a black and white narrative of music, dance and acting performed by the famous Serbian actor Branislav Trifunovic and actress Tamara Aleksic.

George Ivanovich has an strongly defined international musical experience, having both lived and played in countries like Serbia, Poland, Germany, Croatia, China and Ireland. He has worked together with some of the most renown Balkan artists such as Dejan Petrovic (the most famous Serbian trumpeter), Nikola Rokvic (the famous Serbian folk singer), Dragan Micanovic (sometimes known as Victor from the Guy Ritchie’s movie Rockenrolla), Lidija Vukicevic (the diva of the Yugoslavian cinema), Iva Kevra (the popular Croatian actress sometimes known as Krista from Black Sun, the popular US Amazon Prime Serbian TV show) and others.

The song ‘Mad over you’ featuring Dejan Petrovic has reached more than 600 000 views on Youtube and was voted number 1 on the Serbian National Television RTS top list. During the summer of 2019 he was hired by the Histrian Plaza Hotel to perform evening concerts for the visitors at the complex at the Plaza Champagne Bar.

The song featuring Nikola Rokvic 'It's fine' has reached more than 700 000 views on Youtube and is by far the most popular song released by Ivanovich.

George was previously affiliated with record labels Lampshade Media in Belgrade (Serbia) and Bentley Records in New York (US). Today George Ivanovich is based in Dublin, Ireland where he has released three of his most recent singles:
- Don’t look at me like we’re alone
- Dance and sing along
- Good evening, God

He is working closely with Adam McNamara as his preferred recording engineer and the legendary Fergal Davis as the mixing and mastering producer on his tracks, who has produced the likes of Sinead O’Connor and Muse. The genres George’s music tends to play with are usually Rnb, Pop, World Music and Indie Rock.

The World Music element is usually derived from his Balkan roots, however not limited to it in any way. The tempos involved are ranging all the way from downtempo to strong upbeat vibes built on poignant and melancholic harmonies. In accordance with the wide tempo range in his original songs, the natural entertainer’s solo performances capture the audience attention by taking the night from slow raptures to fast and back.